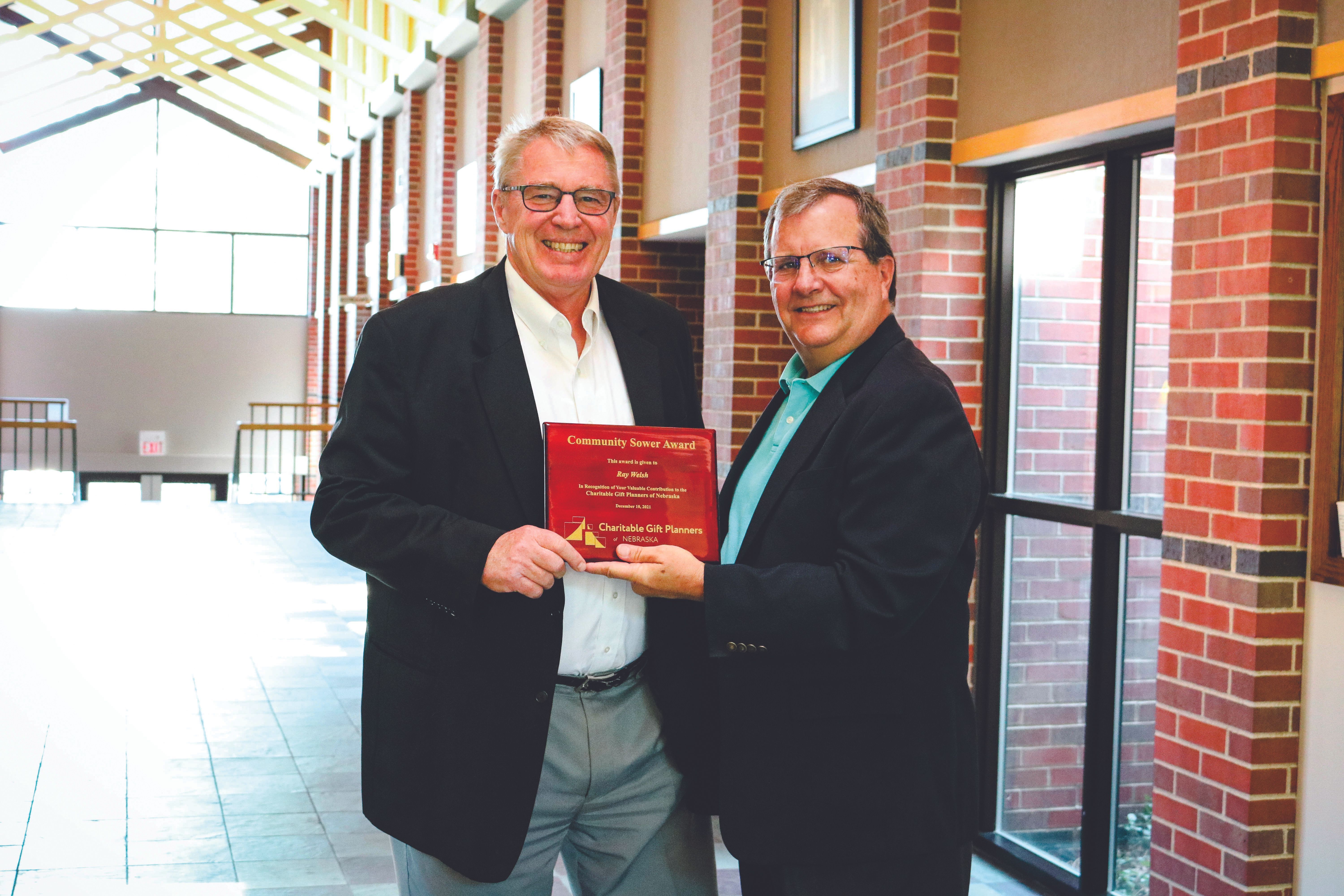 The Charitable Gift Planners of Nebraska (CGPN) honored Pender’s Ray Welsh with the 2021 Community Sower Award at its June 3 meeting in Lincoln. The award recognizes Nebraska professional advisors for outstanding efforts in engaging clients in philanthropy and personal involvement in philanthropy. Judges assess candidates’ impact on quantity and quality of charitable gifts, experience, and peer relationships.

Distinguished Service Award to Melissa Wagner Filipi.  The award is designed to commemorate the dedicated leadership of Bob Sandberg and to recognize in his honor, notable and distinctive service to the planned giving profession.

Filipi has served the nonprofit and charitable sector at the highest levels for nearly 20 years.  Her service, both as a direct line fund raiser and as a consultant, has included the Humane Society, the Dressage Foundation, the Boys and Girls Club, Audubon and the Community Services Fund of Nebraska.

In addition to her undergraduate degree from the University of Nebraska Lincoln, Melissa also received her Master’s in Business Administration from UNO and, in 2011, she received the Certified Fund Raising Executive credential – the CFRE.

In addition to her demanding professional role, she has also served on a number of nonprofit Boards including the Keno Human Services Advisory Board designing programs for children and families in need.

Melissa’s service to the gift planning profession is well-known in Nebraska.  She has served on the Charitable Gift Planners of Nebraska’s Board of Directors for nearly 13 years including two years as President.  Her leadership helped establish regular goal-setting and strategic planning efforts for the association’s membership and Board that continues today.

The CGP of Nebraska is honored to name Filipi as the 2019 J. Robert Sandberg Distinguished Service Award recipient.

Charitable Gift Planners of Nebraska will present its 2018 Community Sower Award to recognize meritorious service by for-profit charitable advisors in Nebraska. We honor professionals advising clients and customers concerning their charitable planned gifts.
Recent Community Sower Award recipients include Nick Taylor of Fitzgerald Schorr, Larry Dwyer of Dwyer & Headley, Jan Krotter Chvala of the Krotter Law Group, Mark Weber of Silverstone, Janet Labenz of Labenz & Associates LLP, and Mike Jones with Elick, Jones, Buelt, Blazek & Longo LLP.
Nominations are sought primarily from CGP of Nebraska members, though nominations may be made by anyone under the following guidelines:
• Active in the for-profit advisor community, including those working in Nebraska as attorneys, accountants, consultants, and trust officers as well as advisors in investments, financial planning, or insurance
• Ten or more years of experience as a charitable advisor to generous individuals
• Highly regarded by peers in the professional and charitable communities, especially reflected by the nominee’s skills, knowledge, ethics, and collegiality
• Tangible evidence of work that the nominee has increased the quantity and quality of charitable planned gifts in Nebraska
• The nominee will be available to personally receive the award
A nomination form is provided; the current and past presidents of the CGP of Nebraska will review nominations. More than one finalist may be selected. The 2018 Community Sower Award, a memento depicting the Nebraska Capitol Sower, will be presented in person at the CGP of Nebraska Celebration and Awards Presentation held at the Quarry Oaks Clubhouse near Ashland, Nebraska on December 7, 2018.

Follow the link below for an online nomination form:
http://www.cgpne.org/contribute/community-sower-nominations.html

Charitable Gift Planners of Nebraska is preparing to present its 2018 J. Robert Sandberg Distinguished Service Award. This award is designed to commemorate the dedicated leadership of Bob Sandberg and to recognize in his honor, notable and distinctive service to the planned giving profession. Past winners of this distinguished award include: J. Robert Sandberg, Robert Chitwood, Jim Heller, Melvin Friesen, Michael Geis, Tom Cullinan, Jim Gustafson, CK Duryea, Chan Tyrrell, Paul Strawhecker, Jodie Nolan, and Marty Ricks.
Award Criteria: The recipient of this award must have tenure in the planned giving profession. This person must be an active member of the Charitable Gift Planners of Nebraska. Also, this person must have made a difference, demonstrated his/her commitment, and mentored others in the field of planned giving.
A nomination form is provided and the past recipients will review nominations. More than one finalist may be selected. The 2018 J. Robert Sandberg Distinguished Service Award will be presented in person at the CGP of Nebraska Celebration and Awards Presentation held at the Quarry Oaks Clubhouse near Ashland, Nebraska on December 7, 2018.

Follow the link below for an online nomination form:
http://www.cgpne.org/contribute/sandberg-nominations.html